Home to the Sierra Nevada Mountain's famous magnificent sequoia trees and deep canyons, the pair of Sequoia and Kings Canyon National Parks are a jointly-administered gem in the heart of central California. While you can squeeze the parks' highlights into a day-trip, if you have the luxury of time, there are some incredible sites that deserve a multi-day exploration.

While surrounded by more famous neighbouring national parks, Sequoia and Kings Canyon National Parks are not to be sniffed at: the world's two largest trees call Sequoia National Park home, as does America's highest contiguous point, Mount Whitney, at 14,494 feet, while Kings Canyon is the deepest canyon in the USA, beating out the much more famous Grand Canyon by 2000 feet!

How to Get to Sequoia & Kings Canyon National Parks

Approximately 4 hours drive from San Francisco to the entrance of the park, these parks sit one on top of the other. 120km to the north is the famous and one of the most-visited national parks of America, Yosemite, while 430km to the east is the incredible Death Valley.

The southern parks entrance is via Vasilia to Sequoia National Park. From there you can drive the Generals Highway northbound along the main highlights of the park. You will then cross into the Sequoia National Forest along the same road, before entering into Kings Canyon National Park. The northern parks entrance is via Fresno to Kings Canyon National Park. Entry fees to the joint national parks are charged at one fee for both parks: $35 USD (at the time of writing). Camping fees are charged separately - book in advance as the campgrounds fill up in the early morning.

Things to Do in Sequoia National Park

Sequoia National Park is bursting with activities for outdoor enthusiasts. If you only have a day, the park's main highlights are nestled along pull-outs on Generals Highway, the park's central road. For those with more time to spend, there are numerous campgrounds dotted throughout the park with access to many of the park's gorgeous hiking trails.

Enter Sequoia National Park at the southern Ash Mountain Entrance. The first stop is the Foothills Visitor Centre, an informative little stop that introduces you to the wonders of the park and guides on driving, hiking and camping within the park boundaries. Following the winding Generals Highway, stopping at roadside overlooks for stunning views across the park and driving through unimaginably tall beautiful sequoia trees, the namesake of the park, until you reach the right hand side turn off for Moro Rock and Tunnel Log.

Moro Rock is the hike up to the top of the round-shaped rock that you can see looming above you as you wind along Generals Highway. The steady climb up the highway means you get closer and closer to the altitude of this impressive dome standing proudly at 6,725 feet/2,050 metres. The hike up to the peak is steep, made up of approximately 350+ rocky steps. The trail is roughly 0.4 miles/0.65 km one-way. Bring water and climb steadily as the heat and high altitude leads to thin air and can make breathing difficult. 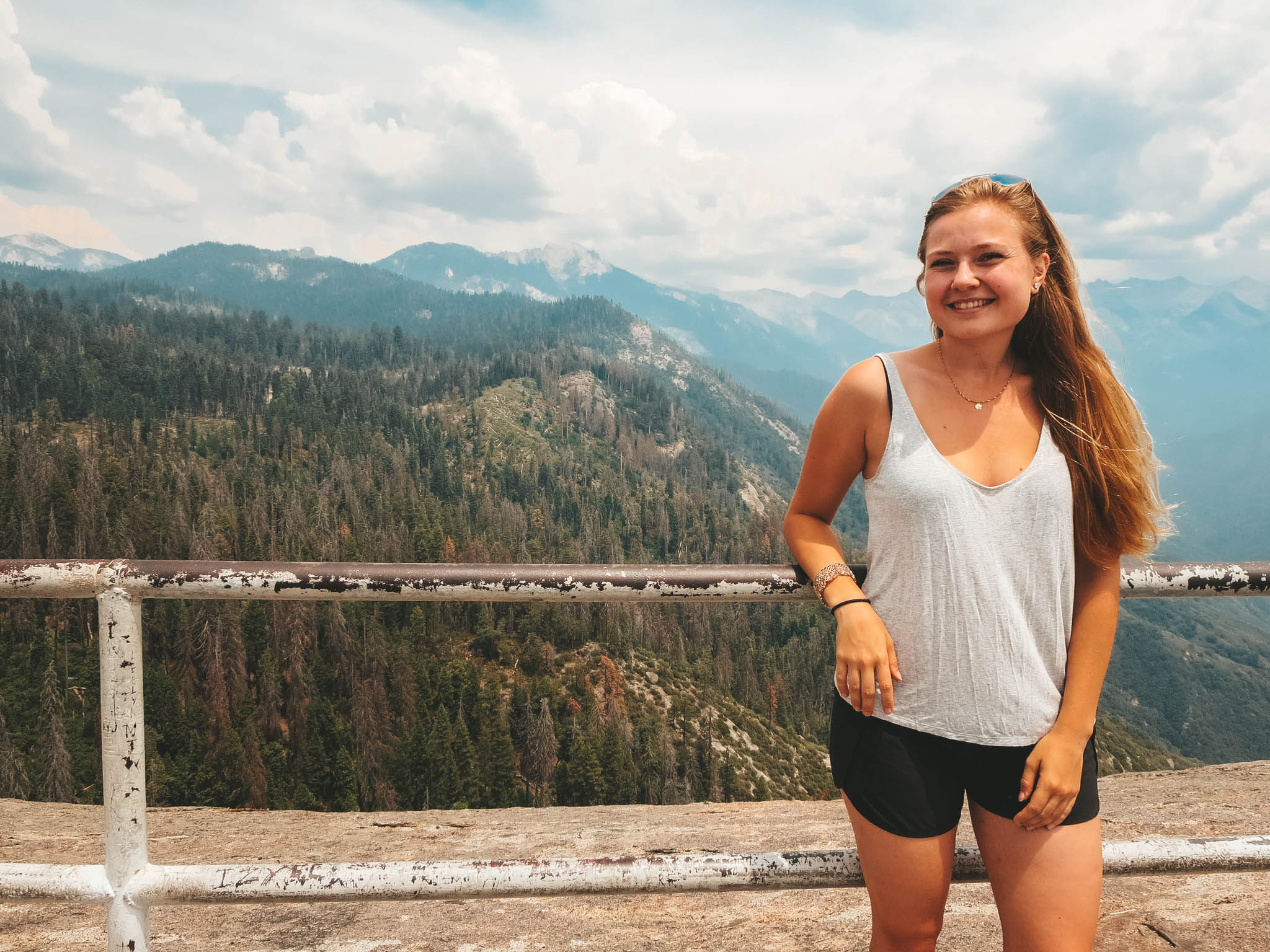 Tunnel Log is the park's famous massive sequoia that fell across Crescent Meadow Road in 1937 due to what the National Park Service considers natural causes. The tree stood 275 feet/83.8 metres high when it fell, with a 21 foot/6.4 metre base. It was at least 2,000 years old, and now lies across the road with a carved out tunnel for visitors to drive through. The tunnel is just about 8 feet/2.4 metres high, so a new bypass was constructed around the fallen log for taller vehicles.

The road up to Moro Rock and Tunnel Log is not a loop, so return the way you came to get back to Generals Highway. Continuing along the road brings you to Big Trees Trail, a 2/3 mile/1 km semi-boardwalked trail through the Giant Forest, home to groves of enormous sequoias. A little further along the road is the famous General Sherman Tree, the largest tree in the world by volume of wood! Parking for General Sherman is up a road just beyond the disabled/shuttle parking lot so as to keep the cars parking up the mountain rather than on the main road. From the lot, a short but steep trail leads down to view the General Sherman Tree.

Sequoia National Park was the second national park to be established in the USA to protect General Sherman Tree and the other old and grand sequoias of the Sierra Nevada mountains. These trees grow only in this part of the world at an elevation of between 5,000-8,000 feet. As Sequioa National park was the first park to be established to protect a living organism, the symbol of the sequoia tree is one of the four features on the National Park Service arrowhead logo.

Continue along Generals Highway, winding through the gorgeous sequoia groves along the smooth and recently repaved highway. Just beyond Lost Grove, you will cross the border into the Sequoia National Forest. It is along this section of the highway where you can stop at the overlook for the famous view into the valley of Kings Canyon.

Things to Do in Kings Canyon National Park

A small portion of Kings Canyon National Park lies separated from the rest of the park on the western side of the Sequoia National Forest. In this area of the joint parks you can find Kings Canyon Visitor Centre, home to detailed maps, guides and tips for visiting the park as well as a restaurant, gift shop and park museum. Stop here for a bite to eat before continuing onwards.

Just a short ways up the road from the visitor centre is the world's second largest tree, General Grant Tree. A much shorter loop in comparison to General Sherman, I greatly preferred visiting General Grant. The trails were natural dirt, not paved cement, and the route allows visitors to clamber through the insides of a fallen monarch tree as well as get up close and personal with some of the most beautiful trees in the park.

Here, the road turns into Kings Canyon Scenic Byway, the only route that makes its way deep into the base of the canyon. Kings Canyon is USA's deepest canyon at 8,200 feet, beating out the Grand Canyon by 2,000 feet! Stop at Junction View for the most stunning look down into the void where the road winds off into the abyss against the rocky backdrop of the mountain range. Drive the entire length of the scenic byway to enter the canyon. You'll notice many burnt trees alongside the road - while it serves as an important reminder to be cautious with your surroundings and to take every care to not start man-made wildfires, the sequoia trees actually thrive off of fire and rely on it to reproduce and grow.

At the tip of the road is the gorgeous Zumwalt Meadow where visitors can frolic in Yosemite-esque fields. There are numerous canyon campgrounds in this section of Kings Canyon National Park, but book in advance because they fill up early in the day. Leave the park by returning on the scenic byway to the visitors centre and exit at the northern Big Stump Entrance.

Hi! I'm Jana, a writer and photographer passionate about documenting my travels and adventures around the world.